Tweet
June 14th 2019 – This is co-posted with permission from the website Cornucopia of Conspiracy – make sure you subscribe to it!
Within the repertoire of elite forces interventions is something called “sustained low-level conflict”, whereby units create trouble that does not justify the expense of a military response by the country within which they are operating. However, it can act as a springboard to escalate hostilities to conventional warfare if required.
Something similar is happening with the practice of “milkshaking”, in which activists opposed to the democratic process douse the targets of their ire with milkshakes, as happened recently to UKIP co-founder and now founder of the Brexit Party, Nigel Farage. it’s probably at most a breach of the peace, and it would be surprising if the police were able to spare the resources to investigate it. 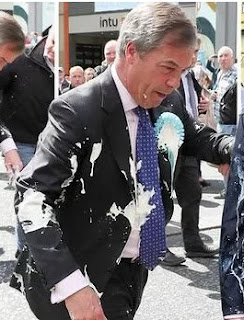 So, in the interests of expanding the vocabulary of isms that seems to be jealously guarded by social scientists and social-workerish types, I would like to coin “milkshakeism”, the practice of committing a minor crime that is meant to inflict humiliation and loss of motivation upon the victim, leaving the perpetrator able to complain about victimisation should the police pursue him or her given the apparent triviality of the offence.
But remember what I said about sustained low-level conflict, that it can be used to launch serious hostilities? A case in point is comedienne Jo Brand using the BBC to make a plea for democrats to be sprayed not with milkshake but battery acid. 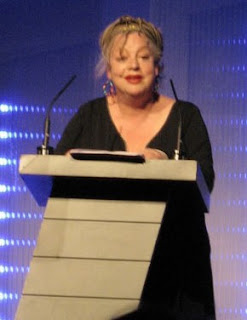 Brand immediately added a rider, on Victoria Coren Mitchell’s BBC Radio 4 show Heresy, that she was not advocating attacking democrats with battery acid. However, as a former psychiatric nurse she knew what she was doing: the battery-acid remark, being emotionally inflammatory, would have bypassed the rational mind, which would have processed only the rider, and been memorised by the amygdala, part of the limbic system that works at a more primitive level than the executive part of the brain, the frontal cortex, but nevertheless has the power to override the frontal cortex in very emotional situations.

In other words, the rider would have been memorised as a fact, but the battery-acid remark as an instruction inserted under the radar of conscious thought of individuals who are already struggling with reality. The result may be an attack upon a public figure that will result in yet more strictures upon our free speech, diverting us from the task in hand, that of actioning the electorate’s instruction to Parliament to leave the European Union.
From the point of view of Brand and her ilk, the action doesn’t even need to be taken against a democrat in order to work. It just needs to be public and shocking, as was the conventional-warfare equivalent, the weakest-link assassination of Jo Cox MP, amid increasingly toxic anti-democracy rhetoric from senior political figures featuring war, genocide and the collapse of civilisation. In Planets and Meaning, I described weakest-link assassination as:

…a hands-off operation where…the identity of the assassin and of the prey are unimportant: all that matters is that emotion-laden toxic rhetoric is weaponised so that somebody who is already struggling with reality is pushed over the edge to commit an atrocity.

Milkshakeism is the low-level counterpart to weakest-link assassination’s conventional warfare. It need not be literally milkshakes that are thrown; we can be dealing with twitterstorms directed at individuals who voice views inconvenient to the Establishment, or real-world bullying of individuals who are different from the rest in ways that aren’t covered by diversity policies, for example in respect to their political views.
So look for examples of milkshakeism in the news, in education and in the workplace. I guarantee you’ll find more of it than you might expect.
Tags::
Previous Article
“YOU CAN BE PURPLE, BLUE OR GREEN; BUT IF YOU STEAL, YOU GET CAUGHT, YOU GET ARRESTED!”
Next Article
PETERBOROUGH SCANDAL | SADLY NO SURPRISE