Some of you MAY have picked up on this story yesterday.

“A veteran peer has been reported to the police for a homophobic hate crime, after he described the SNP’s Hannah Bardell as “queer”.   The Livingstone MP confirmed she had filed a report on Lord Maginnis, describing his behaviour as “wholly unacceptable”.

Now then, full disclosure. I have been a long term critic of Maginnis.

I also don’t think it is very polite to refer to Gay people as “queer” – I would never do so.

However, I also hate hypocrites.

Now read on as we tumble down the rabbit hole.

Let me show you SNP Hannah Bardell’s twitter bio as of yesterday. 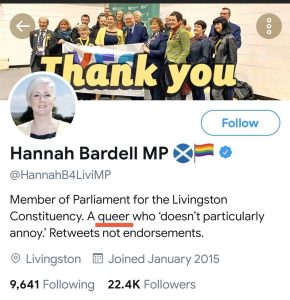 Clear? She refers to herself as a “queer” – so it seems to me that Maginnis was simply following her own description of herself If she can use the term to define herself, why can he not use it to define her if he so wants? How is it a “hate crime” to define her in the same term she defines herself?

Then, this morning, after she generated all the PR about being the “victim’ of hate crime, something changed. Have a look. See the difference? 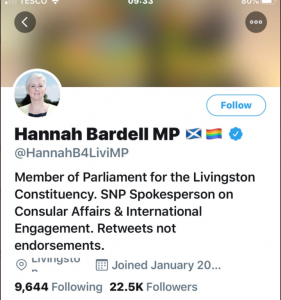 I politely asked Ms Bardell to explain this change as it is pertinent to her claim.

Within 60 seconds I got this response. 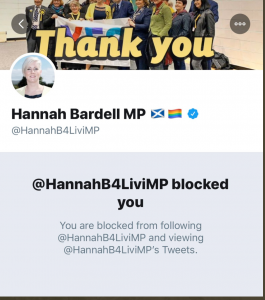 I have passed details to Lord Maginnis.

The Two Faces of Lewis Hamilton

HYPOCRITE LAMMY AT IT AGAIN